THE MUSIC OF SILENTS

At one point in my novel, Sloane Hall, the old cinematographer Leo asks John Doyle, now a chauffeur for starlet Pauline Sloane, if his boss needs any musicians for parties. That’s because Leo knows “some good piano players. Out of work organists, really. No need for them in the theaters much now.”

Odd-voiced actors weren’t the only ones losing their jobs when silent movies shifted to sound; many musicians also found themselves out of work. Music had played an integral role in silent films, with even small theaters hiring a pianist to accompany the flashing images.

Larger theaters in major metropolitan areas actually supported full orchestras. Such was the case with the old Capitol Theater in New York, where a house orchestra rehearsed twice a week for three-and-a-half hours each.

Not only did these orchestras accompany the showing of the film. They often also played overtures from the classical repertoire before the film began.

In his excellent history of the era, The Speed of Sound, Scott Eyman writes:

“In larger theaters, the orchestra conductor had the responsibility of compiling the musical score for a film from large libraries of sheet music: light classics or source music composed especially for stock situations, agitatos for actions scenes, and so on. . . Very early, the showcase theaters provided music of considerable sophistication. Accompanying the premier engagement of Cecil B. DeMille’s Chimmie Fadden at the Strand Theater in 1915, audiences heard the overture from Cavelleria Rusticana, a duet from La Forze del Destino, and the sextet from Lucia Di Lammermoor.”

According to Eyman, the Capitol Theater orchestra conductor would regularly log over nine hours on the podium on a Sunday and also conduct evening shows. The matinees were left for assistants. 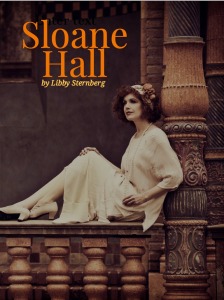 The eighty-five piece orchestra at the Capitol, by the way, employed a young concertmaster by the name of Eugene Ormandy, who eventually became the theater orchestra’s conductor before moving on to bigger things.

In 1931, Ormandy’s really big break into mainstream classical conducting came when he was asked at the last minute to conduct the Philadelphia Orchestra, filling in for an ill Arturo Toscanini. After this auspicious debut, he went on to become the conductor of the Minneapolis Symphony Orchestra until 1936, when he returned to Philadelphia and began his 44-year tenure leading that esteemed ensemble. He was known for being a quick study, often conducting from memory.

Years later, he reminisced about his debut with the Philadelphia. Stepping in for Toscanini on such short notice had actually been easy, he commented. “Of course,” he said, “I knew Till Eulenspiegel very well. We played it at the Capitol.”

Sloane Hall by Libby Sternberg, a story set in old Hollywood and inspired by Jane Eyre, tells the tale of troubled chauffeur John Doyle, who falls in love with his starlet employer Pauline Sloane, only to be repulsed by secrets she hides from the camera and the world.