Excerpts from THE LAST ROMANTICS

The Last Romantics by Elizabeth Malin 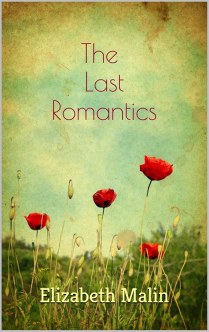 “Like The French Lieutenant’s Woman by John Fowles, The Last Romantics by Elizabeth Malin is a layered story that sends you back to the golden age of American literature and forward to the world of contemporary popular literature with the editorial mantra of ‘sex sells.’ Malin deftly brings each of the three stories in The Last Romantics to a successful conclusion that should please all readers.” – Joan Reeves, NY Times & USA Today bestselling author

Kate and Jim: A struggling romance novelist, Kate must deal with an editor pushing her to write steamier books and a husband who decides to dabble in producing his own “art.” But is he really creating something of value or just mocking Kate’s own attempts at becoming a literary artist?

Jake and Belinda: The hero and heroine of Kate’s latest romance novel, this duo faces danger as someone makes an attempt on Belinda’s life while they try to figure out if lust can lead to true love…

Zelda and Scott Fitzgerald: While Kate pens her hot new novel, she discovers a cache of pages penned by a “Beatrice Rutherford,” who appears to have been a typist for the great literary writer and who sheds new light on what really happened to the famous couple. These papers provide Kate with a pathway to greater publishing success, but she questions whether her good fortune is real or fake…

The Last Romantics is a sweet love story, a hot romance, and an inside look at the publishing world, filled with delectable tidbits and juicy details professional writers will especially enjoy. If you enjoy “insider” books such as The Devil Wears Prada, you’ll like this behind-the-curtain peek at the publishing industry.

“…it wasn’t that he was afraid of losing her…He wanted to be always falling in love with her. I saw the desperation in his eyes for it, the question — will I get it back? And he wanted it back for practical as well as poetic reasons. You can’t write about unrequited love so well when your own love’s sitting in your lap, cozy as a kitten….Scott, I discovered, didn’t write fiction so much as memoir…He couldn’t seem to pull a foreign idea from his heart. It was Zelda, Zelda, Zelda. Endlessly fascinating Zelda.”

“‘It amazes me that publishers don’t know how to sell books to readers,’ Kate wrote. ‘They do not know how to actually sell the books’….’Amazon knows how, ‘Marie countered…’And they loathe Amazon,’ Kate wrote.”

“Big publishers were the old blood, Amazon the new. And like most old money, the publishing houses looked down their noses on outré arrivistes…

The book business was part of the entertainment industry. And while other parts of that industry had figured out long ago how to market directly to their consumers, the publishing business stayed stuck in some nineteenth century model, occasionally muttering about the decline in readership like a spinster complaining of morals today, prim pinky finger raised by her teacup….”

“There is a moment in that Gatsby of his where Daisy, his Zelda, tells Nick she’s been everywhere and seen everything. ‘Sophisticated — God, I’m sophisticated!’ she tells him. But it’s a sham, a bit of fakery, to cover her real heartbreak at finding out the world — the everywhere and everything — didn’t care about her as much as she thought it did…You see, Daisy’s something of a cipher, isn’t she? Did she love Jay or Tom or just herself? I like to think she loved Jay truest of all, but it broke her spirit when she couldn’t have him, so she decided that’s what being sophisticated meant, giving up tenderness and kindness and honesty for the accumulation of comforts and consolations…”

“‘Will you please stop this?’ Becky said. ‘You think you’re not sophisticated, but what you really want is to be accepted by a bunch of folks like that Ranier person. And she’s not sophisticated. She’s a snob….a snob feels superior even though he himself has nothing beyond the most shallow understanding of things he holds dear, only knowing that they set him apart from the rabble…most snobs probably reflexively dislike anything that’s popular.'”

“…seeing her again made him realize just how much she’d populated his thoughts. Every day for the past five years something related to her had floated through his mind, even if it was an ephemeral impression, like an audio imprint, or a sand indentation, quickly smoothed out by the next onslaught of reality, work, life…”

Exclusively on Amazon Kindle. Available at all e-tailers and in print in 2016.