If  emotive storytelling appeals to you, then hurry and place Courting Mr. Lincoln, a historical novel by Louis Bayard, in your Amazon cart.

The “courting” in this tale is twofold: set in the early 1840s, it tells how Joshua Speed educates Lincoln in society’s ways so he can actually court Mary Todd, who is in Springfield, Illinois visiting her sister with marriage on her mind. Young, frontier-rough Abe Lincoln is a boarder in Joshua Speed’s rooms above Speed’s general store. The two men share a bed, in fact, something not unusual at that time.

They also share a deep friendship, a love for each other, and a great respect for virtues of fidelity and honesty. Those characteristics cause Abe the most pain, when he comes to realize that his toast to “bachelorhood” is taken by Speed as an oath:

“I thought we made a vow,” (Speed) said. “Never again to think of marrying, do you remember? Because we couldn’t be satisfied with anybody who’d be blockhead enough to have us. We made a toast to bachelorhood. To brotherhood. Do you recall?”

Lincoln agonizes over breaking this “vow,” such as it is, without adequately taking into account Speed’s feelings, which have grown very deep for this unusual blossoming politician who already seems to have a great destiny before him. Some historians speculate if this relationship was more than friendship.

Both men end up leaving each other for marriage. Speed eventually marries Fanny Henning after returning to his native Louisville, Kentucky, and Lincoln weds Mary Todd, but not without first breaking their engagement, as he sorts out, in this telling, if he’s worthy of her and whether he’s been unfaithful to his friend and that “oath” they made to each other.

The story is told from two alternating points of view, both in third-person: Joshua’s and Mary’s. Mary Todd has received some shabby treatment over the years, with an emphasis on her involuntary commitment to a mental institution years after her husband’s death, so it was refreshing to read this sympathetic take on her character. Bayard paints a portrait of a wildly intelligent woman who was Lincoln’s equal intellectually, perhaps the main reason he was attracted to her. 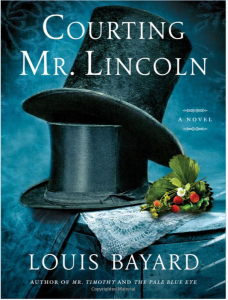 Louis Bayard is a master at historical fiction, using details about dress, etiquette, speech, and more to set you smack-dab in the time he’s placed his stories. In Courting Mr. Lincoln you can smell the mud-clogged streets of 1840 Springfield, Illinois, hear the buzz of horse flies when windows are left open in warm weather, see the perspiring faces of party-goers crammed into small rooms with blazing hearths. You’ll want to read more of his oeuvres after this well-done novel, and perhaps more history of Lincoln, too. I’ve already ordered the book of letters from Lincoln to Speed that Bayard mentions in his acknowledgments.

One final note: If you go to Amazon to order this book, you’ll see it’s highly ranked in “LGBT” literary fiction and historical fiction. It is definitely a story of male love, but it is in no way sexually explicit. It is first and foremost a beautiful story of transcendent love, devotion, and destiny, a small piece of a history of a very great life. I highly recommend it to all readers.