Wish you were here…

My mother and father were wonderful people. I was blessed to have them. But, like most kids, I feel that blessing most acutely now that they are gone.

My mother passed away at the age of 63 when I was 33. Elizabeth Beatrice was her name, but she went by Bea.

Thirty-three years should have been adequate time to get to know her, but as time passes, I realize that I was just beginning to comprehend who she was as a person, not just as my mom, and to relate to her as an adult…when she was gone from my life.

One of my children remarked once that I don’t talk a lot about her, and I decided this is a disservice to them and to her, that I’ve not shared more about the grandmother they didn’t get to know.

So, here then are some memories of my mother:

First, she was beautiful. She came from a family of redheads, and, like her mother and some siblings, she, too, was a ginger. Ginger is an apt way to describe her hair, because as she aged it went from deeper reddish hues to a strawberry blonde shade that hairdressers envied — what dye did she use, they’d ask her. She had blue eyes to go with that gorgeous natural hair. (As an aside, pictures never really captured her hair’s real shade; her hair sometimes photographed darker than it actually was.)

She was born and raised in a small town in Indiana, with a German-born mother and a taciturn father (Nanny and Pop-Pop to their grandchildren). She had two younger sisters  (Lillian and Helen) and an older brother (Alvin).

She married my father in World War II, when he was stationed in Indiana. I asked my aunt Lil to help round out my picture of Mom, and here are some memories she shared with me:

She was very private about her inner feelings. I remember when she brought your dad to meet us. They were a handsome couple, he in his uniform, and she in a snazzy black dress…A lot of guys in service came to Anderson to the various night spots. The Boat Club was one of the nicer ones with dining, dancing, drinking. It was a whirlwind courtship, but that happened all the time in wartime…We liked your dad right away as he was very personable.

The other morning, I was remembering how she and Alvin would argue, trying for top position in the family, two redheads. He used to say all of his sisters were smarter than he was, but I knew Bea was the smartest of all…

Your mom was a lot like our dad, quiet, but when he had something to say or tell you, he was very succinct or blunt. So was Bea, but then she would surprise you with something witty. At her eighth-grade graduation, when Father Scheetz asked her if she was going to follow in her brother’s footsteps, Bea deadpanned, “No, I’m going to make my own.”

Her footsteps took her away from Indiana to Baltimore, my father’s hometown, where she raised my sister and me in a suburban split-level that felt like a castle to us. She was, like many women of that era, a stay-at-home mom. Once my sister and I were in school, she would get together regularly with some friends of hers for luncheons. She had a set of dishes for those gatherings — clear glass triangular plates with an indentation for a tea cup in the corner.

I remember she and Dad went to a fancy dinner event one year, maybe a New Year’s gathering, for which she bought a new long dress, something pink, I think, and chiffon. But what I most remember is she got a parking ticket when picking it up, and she told us not to tell Dad. I did, of course! She wasn’t angry.

She was devout — I remember praying the rosary in our old row home living room with her, and she encouraged our devotion to Mary during the month of May, when we would set up little shrines to the Blessed Virgin on our dressers. 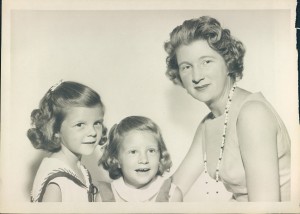 My mother with me and my sister

When we moved to the split-level on a December day in the 1960s, she’d packed all the Christmas gifts in the station wagon, drove us what seemed like a world away (it was only a few miles, it turned out) through snowy streets, and the first thing she did in her new kitchen was make chocolate chip cookies and hang curtains.

She was sometimes unhappy — our dad had a volatile personality (later, I realized I might have inherited it!), but she loved going to the movies, theater, reading. And she loved her girls, wanting for us all the happiness in the world. She encouraged my singing and was immensely proud of me, once traveling with me to New York when I finaled in a singing competition. I think she wanted me to step out of my shy shell more when I was younger.

When I was 22, I spent the summer at the American School of Music in Fontainebleau, France. It was my first time away from home (my sister and I were commuter students during our college years), and, since it was before the age of email, I have a treasure trove of “aerogrammes” and letters on onion-skin paper (back in the days when the weight of an overseas letter was an important determination for expense) that she and other family members sent me. It’s touching to hear how she and my sister would read my letters to them aloud to each other.

Looking over them now, I hear her voice, as she gives me the details of everyday life — the movies she and “Daddy” went to, some troubles she was facing at work (she’d taken a job after my sister and I entered high school), friends of mine she contacted on my behalf, news of clothes purchases — a steel-blue pantsuit, a safari jacket for my sister —  my sister’s life with her new husband…little details, yet so much more. In between the lines, there is a boundless well of love.

“We had a terrible storm last night,” she wrote in July of that summer, “electric was out for five hours. Daddy wants me to set all the clocks but leave one on Paris time…”

My guess is she did so, happy he’d suggested it.

I love you, Mom. Wish you were here. Happy Mother’s Day!