The “I am not worthy” syndrome

So, this happened: Patricia Arquette won the Academy Award for best supporting actress and used her moment at the podium to advocate for equal pay for equal work. Hear, hear. Meryl Streep gave a great fist pump, or some sort of gesture indicating endorsement.

And who wouldn’t endorse such a notion, really? Of course, women should be paid as much as men for equal work! What a ridiculous notion that anyone would believe they shouldn’t be! 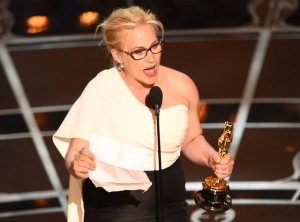 But out in Hollywood, famous for its left-leaning politics, you’d think you’d find those thoughts in action. Not so. As the hacking of Sony records revealed, female stars (not just actresses but bona fide, household-name stars with box-office drawing power) were getting less than their male costars. Oopsie.

Ouch. But, the reason it hurts is because it’s true. Women often accept less because they don’t ask for more. This was also explored in an excellent essay in the Wall Street Journal earlier this year. Written by a woman, it went through the various ways women differ in their approach to jobs. Here was an enlightening tidbit about promotion-seeking:

Mr. Kaufmann of Cardinal Health noticed that if a job opening has five criteria, a woman with four of them won’t apply—but “a guy will have one of the five and will say, ‘Give the job to me!’ ”

A recent CBS News story about the gender pay gap being a myth interviewed a career expert who pointed out, among other things, that women business owners get paid significantly less than their male counterparts:

I don’t think the pay gap is a myth, and I suspect most women don’t think so either. But count me among those who believe there are complex reasons for pay disparity, few of which are linked to outright discriminatory practices. In the CBS story, the expert noted that women business owners make less than their male counterparts often because they place more value on more flexible schedules and shorter work days/weeks, while men…just want the money.

Women also seem to suffer from the “I am not worthy” syndrome, as indicated in the Wall Street Journal essay mentioned above. I know I often do. Just ask me about my book royalties, and I’ll tell you a story about not paying adequate attention to them because I thought I wasn’t a best seller, so why bother. (I wasn’t worthy of success, see?)

Throw in the mix an angle to the problem that possible Republican presidential candidate Carly Fiorina has been trying to draw attention to–seniority pay systems. Many unions use seniority to determine pay scale. Since a lot of women drop out of the full-time work force to rear children, this puts them at a disadvantage on the seniority scale. Fiorina argues that merit pay rather than seniority pay is part of the answer to some gender pay gaps.

What’s the right response to the pay gap problem? Is it legislation? Or is it…education? Maybe a combination of both. I find utterly distasteful corporate policies that forbid employees from talking about salaries. It seems to me that’s a violation of free speech rights. Information is power, and, if women knew what others were getting paid in an office, they might speak up more for similar amounts for the same work. (Actress Charlize Theron did just that after finding out what her male costar was making on a film–she demanded and got the same.) But I also think women need to be coached, mentored, educated on how to stand up for themselves, how to fight the “I am not worthy” syndrome, how to apply for promotions, place value on themselves and learn, most importantly, when to walk away from a deal that isn’t so sweet.

Women’s organizations would do a great service to their sisters by sponsoring such programs. Maybe many already do. This would be a far more serious effort to advance gender pay equality than some of the theatrics we’ve seen recently where pols on the left (who are guilty of paying women staff less than men, too) use the issue to bash pols on the right (who too often deny the problem).

Women should be paid the same as men for the same work. But they shouldn’t wait for men to solve this problem for them.